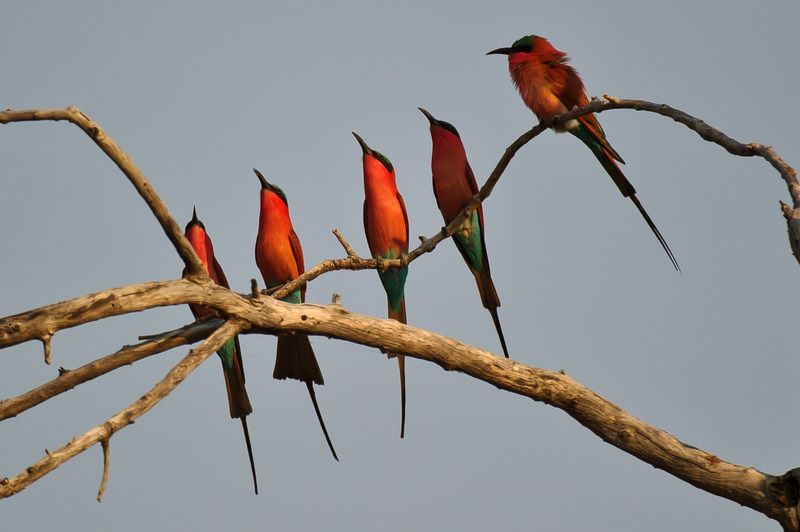 By WWS TeamOctober 1, 2021No Comments

The sounds of sunrise on the banks of the Luangwa River in Zambia’s South Luangwa Valley. A noisy colony of Carmine Bee-eaters go about their business.

It’s not quite light but the Carmine Bee-eaters breeding in one of the banks of the Luangwa River are already out and about collecting food for hungry chicks. One of the great summer spectacles in Zambia’s South Luangwa National Park. Hundreds of brilliantly coloured birds flying backwards and forwards throughout the day as they catch butterflies, dragonflies, cicadas and many other flying insects to feed their chicks.

The local Lion pride roar loudly before they settle down to rest after a busy night while the bee-eater’s chatter in the background. The male members of a troop of Yellow Baboons call loudly asserting their dominance within the group and probably reacting to the lions at the same time; with the crooning ‘kuk-kroo-oo’ call of Ring-necked Doves in the background. The bee-eaters pay little attention to these other activities, focusing on hunting for food instead.

A Red-necked Spurfowl gives its crowning call (5.00) and well in the background the first safari vehicle of the day heads out of camp with excited guests. In between bouts of collecting food, bee-eaters take short breaks perching on the sandy back close to the nest holes. In the river below a Hippo returns to the water after a night of feeding causing other members of the pod to give their honking calls.

The ‘terk-terk’ call of the bee-eaters is interrupted by a pair of African Fish Eagles calling loudly from trees on the opposite bank (7.25). Then way in the distance an Elephant gives a single trumpet (7.45).

Suddenly the Fish Eagles take to the wing flying past the colony causing an explosion of pink and blue as hundreds of bee-eaters pour out of their next holes giving harsh alarm calls at the same time. An Egyptian Goose also shows its displeasure with a loud honking call. Immediately afterwards the birds settle down, some adults returning to their individual nest holes, others relaxing on the edge of the riverbank while the goose calls as it too flies past the colony.

The Fish Eagles return to the trees on the other back calling in duet (14.05) while a few minutes later a Hippo surfaces noisily, splashing around and then calling (16.00). A few minutes later (20.00) the herd bull calls and other hippos up and down the river call back in response. The bull chases another male that gets too close to the females (21.38) and then with vigorous tail wagging, showers dung at his opponent in annoyance and honking loudly (21.53).

Calm returns to the river while bee-eaters fly out to feed, others quietly chuckling to themselves as they rest on the riverbank. Occasionally the Fish Eagles call from the trees in the distance. Something disturbs the Egyptian Geese resting on the edge of the river and they call in annoyance, the female giving a honking call, the male a harsh hissing. (25.40). Down in the river, the hippos grunt and splash in the water and then several members of the pod call and grunt occasionally (29.30).